Skip to content
Facebook is rolling out a new feature called
“Latest Conversations” in its search results that will show the most recent
public posts about timely topics that a lot of people across its network are
discussing. The unit gives you a wider view of what people are saying about a
news story or other subject by exposing you to sentiments being expressed
outside your social circle.
After searching a news topic, Facebook will
now display public user generated posts from users outside your own personal
network, along with a live ticker estimating the number of people engaging with
the topic. 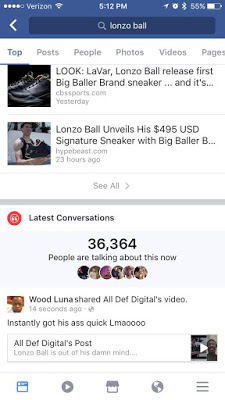 A Facebook spokesperson confirmed that the new
feature is more than just one of the many A/B tests that crop up from time to
time on the network.
“We’re rolling out a new section in
search results that will show the most recent public posts about timely topics
that a lot of people are discussing on Facebook,”
While the feature feels more experimental,
Facebook confirmed that it’s rolling out to users now. We’re currently seeing
it in Facebook’s mobile app, but not on the web.
via