Skip to content
If you’ve never experience the power of flash charging, then
Quick Charge 4+ will be like a parable to you. 6 Months ago, Qualcomm announced
Quick charge 4.0, a notable feature of Snapdragon 835 chipset that allow a
smartphone to go from empty to 50% in just 15 minutes.
But among the newly
released smart devices of the season, like Galaxy s8, s8+, Sony Xperia XZ
Premium, Xiaomi Mi 6, and HTC U11; none of them carry supports for Quick charge
4.0.
Quick Charge 4.0+ can charge a device up to 15% faster, and
it’s 30% more efficient when compared to Quick Charge 4.0. 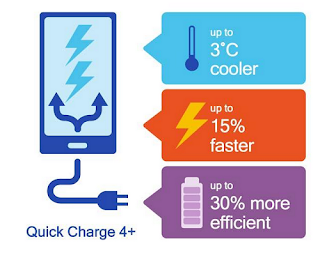 Quick Charge 4.0+ comes with all the benefits of Quick
charge 4.0 plus 3 extra enhancements as seen below;
1. Dual Charge: which is present in previous versions of the
technology but is now stronger than even. With Dual Charge, the charge current
will be divided allowing for lower thermal dissipation and reduced charge time
(up to 15%).
2. Intelligent Thermal Balancing: This conducts current via
the coolest path autonomously, thus eliminating hot spot for optimized power
delivery.
3. Advanced Safety Feature: Quick Charge 4 already includes
rigorous built-in safety protocols. Quick Charge 4+ goes one step further and
is designed to monitor both the case and connector temperature levels
simultaneously. This extra layer of protection helps ward against overheating
and short-circuit or damage to the Type-C connector.
With all the 3 features above incorporated into a device, that
device has the potential to charge up to 15 percent faster, or 30 percent more
efficiently when compared to Quick Charge 4.
According to Qualcomm, the first smartphone to run Quick
charge 4.0+ technology is the Nubia Z17, which was unveiled earlier this week.
The handset comes with a 3,200 mAh battery, a Snapdragon 835 processor, as well
as 8GB RAM and 128GB storage.
Via

10 thoughts on “Quick Charge 4.0+ Announced… Fast charging at the speed of thought”