This is a new upgraded feature on Google search spotted in the wild…though
this is not visible to all but some selected few. I believe Google is still
testing it.

A new feature coming to Google search will show a comparison when you search
for two phones and it detects “vs” in the search query.

A few users have reported that when they searched for two devices with “vs”
in the query, they got presented with a comparison table highlighting the specs
of both phones. The example shown below is that of the Pixel 2 and the Pixel 2
XL. 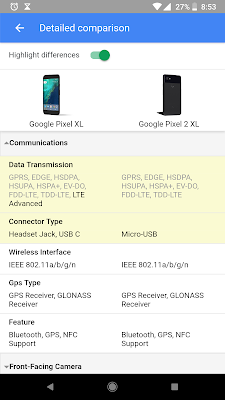 You can expand the chart by hitting the blue button, and there’s even an
option to highlight differences.

Though at the moment, this only work for two devices Pixel 2 and Pixel 2 XL
and google is yet to make any public announcement as regards this but it is a
welcome development.

Once the feature is active for all, you should be able to compare Samsung
Galaxy S9 VS IPhone X and you will see the basic differences.