Skip to content
The downvotes feature is not in any way related to dislike
that people have been craving for or a look alike of Reddit upvotes and
downvotes.
However, the “downvote” button Facebook is testing will help
clean up some of the hateful comments and fake news posts that are currently
wreaking havoc on the social media platform. 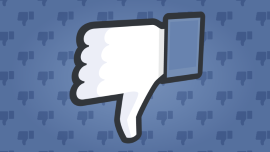 The downvote button will eventually appear in the area where
you would normally “Like” a post or reply to a comment. When tapped, the
downvote button hides a comment, and gives users additional reporting options
like “Offensive“, “Misleading“, and “Off Topic“.
Those could help Facebook figure out if the comment is objectionable, a form of
“fake news“, or just irrelevent.
Here is a look at a comment with “downvote” option;

According to Facebook, the feature test will affect about 5%
of Android users who have “English” set as the default language in the app. The
downvote button, for right now, only appears on public Page posts, not on
Groups posts or those from individual users.

But the new downvote button is the closest Facebook has come
to actually giving people a dislike button.
Source: MSN