Like we stated yesterday that a huge change is coming to WhatsApp and now the change is rolling out gradually… It is transitioning from just being a messaging app to a VoIP service with group voice calls and video calls.

Initially, only 4 participants are permitted to join a WhatsApp group calls/video but now, the limit has been lifted due to increase in demand, and it’s going to compete with the like of Zoom for meetings and even to interact with your family. 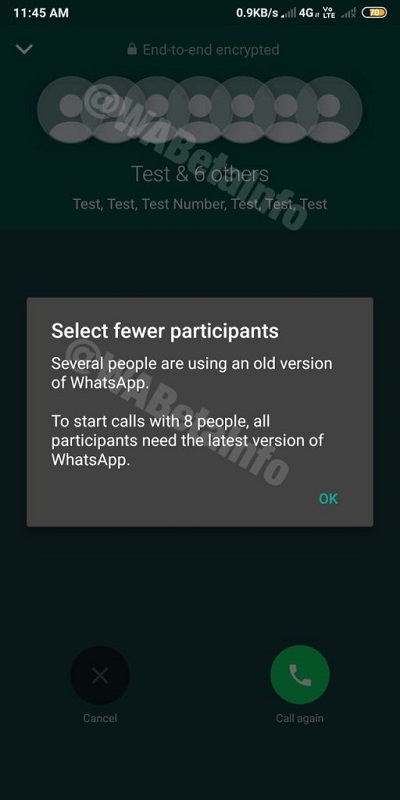 Beginning from Today, WhatsApp is increasing the group call (both voice and video) participants limit to 8 and it is live for beta users on Android and iOS. With time we believe the limit will be increased again.

How Does it Work?

How to Initiate a Group Call

Open a group and tap the Call button: if the group has a number of participants higher than the old limit (4) in a call, WhatsApp will ask which contacts you wish to call to, otherwise the call will be directly started.
Group participants that aren’t saved in your address book won’t be added in the call.

Just as we started yesterday, you need to be running the latest WhatsApp beta on Android version 2.20.133, and on iOS, users need to install the version 2.20.50.25.

It is now rolling out to beta users and it will be rolled to the stable version of WhatsApp in the coming weeks.

Let us know in the comment if you have gotten the new feature.