Skip to content
Today at CES (The largest tech show on earth 2017) Asus announced two new smartphones, both of
which have been in the rumors quite a lot lately. We’re talking about the
Zenfone AR and Zenfone 3 Zoom.
Asus Zenfone AR is a phone that is trying to drag us into the
future, it is the first smartphone capable of both VR and AR, it’s also only
the second-ever Tango-compatible Android handset. It has a large camera module
that looks like something from Nokia’s now-gone Lumia smartphone series. 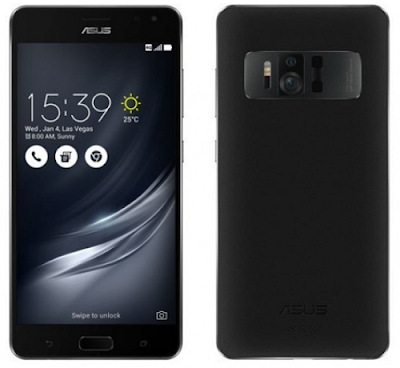 The Asus Zenfone AR is a sleek, 5.7″ device with all
the regular features of your modern-day smartphone: a high-res Quad HD display,
a fingerprint scanner, and it’s powered by Qualcomm’s Snapdragon 821 chipset
aided by a whopping 8GB of RAM – This makes the Zenfone AR one of the first
phones with 8 gigs of RAM on board, but it is really the augmented reality that
is the king here.
The main snapper is a 23 MP unit using Sony’s IMX318 sensor,
with OIS, EIS, and 4K video recording. Thanks to Google’s Tango requirements,
on the back there’s also a motion tracking camera and a fisheye depth-sensing
camera.
The Asus Zenfone AR release date is set for the second
quarter of 2017
Source: Asus

13 thoughts on “Asus Unveils Zenfone AR, The first Smartphone With 8GB Ram… there is more”