It
seems Nokia is preparing a lower version of the recently announced Nokia 6
smartphone. A new Nokia phone was sported on GFXBench benchmarking platform
with mid-range specs confirming the rumor that Nokia will be releasing 6 – 7 smartphone
this year 2017.

The
new Nokia phone called Nokia Heart will be coming with a 5.2-inch display. It
supports an HD resolution of 720 x 1280 pixels. The Nokia 6 is powered by
Snapdragon 430 SoC. The Nokia Heart is expected to include the same chipset. It
features a 1.4 GHz octa-core processor and Adreno 505 graphics. 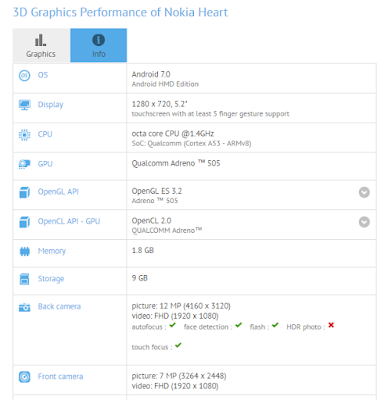 Ist
SoC  will be supported by 2GB of RAM and
it will include a native storage of 16 GB. it will feature a 12-megpixel rear
camera and a front-facing camera of 7-megapixel. However, the smartphone may
feature 13-megapixel rear snapper and an 8-megapixel selfie camera.

Nokia 6 is immensely popular in China as it went out of
stock within a minute in its first flash sale. Nokia Heart spec as listed on
GFXBench suggest that it’s a lower version of Nokia 6 that comes with 4 GB of
RAM and 64 GB of native storage.

No
any information regarding the price.