Skip to content
This is one of the most interesting phone
Alcatel displayed at MWC 2017.Alcatel calls it the Alcatel A5 LED “The world’s
first interactive LED-covered smartphone”. That means that the LED will light
up when you receive all sorts of notifications e.g. phone calls, messages,
emails etc.
Also, the LEDs will light according to the
music you listen to. In addition, you will be able to customize the LED lights
in a lot of different ways. 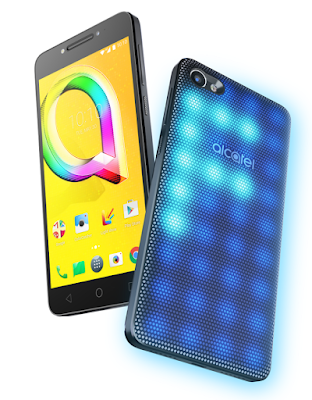 The Alcatel A5 LED is powered by 1.5GHz
octa-core Mediatek MT6753 processor and it comes with 2GB of RAM. The phone
packs 16GB of internal storage that can be expanded up to 32GB via a microSD
card. As far as the cameras are concerned, the Alcatel A5 LED packs a
8-megapixel primary camera on the rear and a 5-megapixel front shooter for
selfies.

The Alcatel A5 LED is a dual SIM (GSM and GSM) smartphone that accepts Nano-SIM
and Nano-SIM. Connectivity options include Wi-Fi, GPS, Bluetooth, USB OTG, 3G
and 4G. Sensors on the phone include Proximity sensor, Accelerometer and
Ambient light sensor.
For the pricing, its expected to go for
199EUR (N91,540)