Skip to content
They say “Immature brand imitate; mature brand steal; bad
brand deface what they take, and good brand make it into something better, or
at least something different.”  VKworld
Z3310 is a perfect imitation of the newly released Nokia 3310 whose price have
scared Nokia fans away from purchasing the phone not only in Nigeria but even
in other countries.
You’ll hardly differentiate Vkworld Z3310 from Nokia 3310
except for the VKworld branding at the bottom of the display. The phone is
expected to be released at the end of this month and will be sold half of the
price of Nokia 3310 and not just that, but it also comes with better spec than
Nokia 3310. 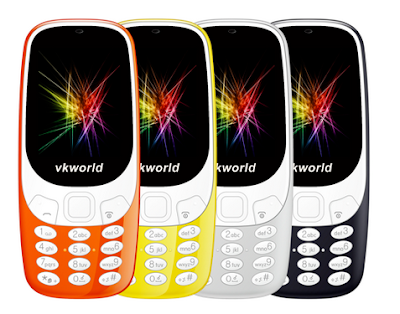 You’ll recall that Nokia 3310 has a 2.4” display, 16MB of
built-in memory and a microSD card slot (32GB max.) It also features a 2MP rear
camera with flash and a 1200mAh battery. If VKWorld is offering something
better, then we should expect a larger built-in memory, a higher resolution
camera and a slightly bigger battery.