Skip to content
Like play like play, WhatsApp hits 1.Billion daily active
users. It is another milestone achieved by the company today. As at last year,
WhatsApp had 1 Billion monthly active users and now, the growth is tremendous.
In a blog post, the Facebook-owned company announced this milestone,
also stating that the monthly active user base has increased to 1.3 billion.
Furthermore, almost 55 billion messages are shared every day in 60 supported
languages. Videos shared per day are now at 1 billion, and photos shared per
day are at 4.5 billion. 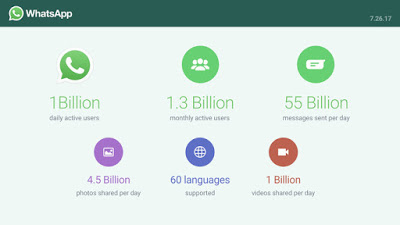