Skip to content
We are all waiting for the TStv decoder to be available for
dispatch to various dealers… though we don’t really know what is causing the
delay but this is what has been happening with TStv in the past few hours.
Some individuals went to compose a letter on-behalf of beIN
to TStv for intellectual property infringement. This is the letter below; Zoom
the image or read the content directly 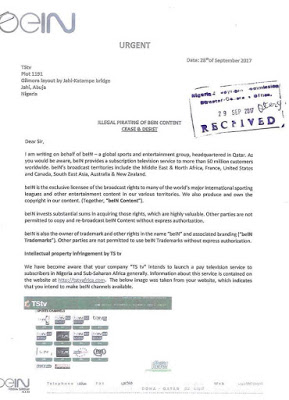 ILLEGAL
PIRATING OF BEIN CONTENT
CEASE
& DESIST
Dear
Sir,
I
am writing on behalf of beIN – a global sports and entertainment group, headquartered
in Qatar. As you would be aware, beIN provides a subscription television
service to more than 50 million customers worldwide. beIN’s broadcast
territories include the middle East & North Africa, France, united States
and Canada, South East Asia, Australia & New Zealand.
beIN
is the exclusive license of the broadcast rights to many of the world’s major
international sporting leagues and other entertainment content in our various
territories. We also produce and own the copyright in our content. (Together,
“beIN Content”)
beIN
invests substantial sums in acquiring those rights , which are highly valuable.
Other parties are not permitted to copy and re-broadcast beIN Content without
express authorization.
beIN
is also the owner of trademark and other rights in the name “beIN”
and associated branding (“beIN Trademarks”). Other parties are not
permitted to use beIN Trademarks without express authorization.
Intellectual Property Infringement by TStv
We
have become aware that your company TStv intends to launch a pay television
service to subscribers in Nigeria and Sub-Saharan Africa generally. Information
about this service is contained on the website at http://tstvafrica.com.
the
below image was taken from your website, which indicates that you intend to
make beIN channels available.
Though,
TStv has issued a disclaimer against the documents that it is frivolous. The
letter above doesn’t look like it was from beIN. Why are we like this for God
sake? Or is this plan orchestrated by Dstv or TStv village people?
Before
you draw any conclusion, wait for the release of the decoder, test all the
channels and if they default, you can then use the social media+rant power.