How to find out if your Facebook profile was used by Cambridge Analytica.

It’s hard to believe how the world has changed in 21 days. few weeks ago, we passed along the news that millions of Facebook profiles had been obtained by a consulting firm named Cambridge Analytica without users’ permission.

Facebook might have violated a 2011 consent decree signed with the FTC that prevented the company from using personal data without getting permission from its owner.

As a result, Facebook has been under fire. Many have deleted the app, or have stopped using the social network. Co-founder and CEO Mark Zuckerberg will testify in front of both the Senate and the House starting today, and a 24 hour boycott of Facebook and its associated apps will start Wednesday morning.

Although 78 Facebook users in Nigeria installed the Cambridge Analytica (CA) app, the potential impact has affected about 271, 469 people in the country, according to the social media platform.

It was alleged that Cambridge Analytica sought to influence the Nigerian presidential election in 2015 by using graphically violent imagery to portray a candidate as a supporter of sharia law who would brutally suppress dissenters and negotiate with militant Islamists, a video passed to British MPs reveals.

Facebook admitted it may have “improperly shared” the personal data of up to 2.7 million people in the European Union (EU). 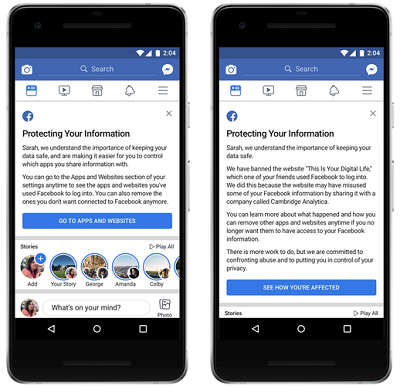 You can tap on a link that will show you how you’re affected. Others will see a notification that discusses a new feature that allows Facebook members to control which apps have access to their personal data.

18 thoughts on “Is Your Facebook Profile Used by Cambridge Analytica?”