Skip to content
Tecno is at it again, but this time they are set to make
history by  entering  the Guinness book of record with their  latest, newest mobile device called Boom J7.
This device has already been launched in Kenya on April 3rd, 2015
and will be launch in Nigeria later this month.

What You Should Know About Tecno Boom
J7
==>  Tecno
Boom J7 lacks 4G LTE which excludes it from the latest LTE (4G) enabled phones.
However it supports both 2G and 3G networks and it’s ofcourse perfect for it.
==>    It
operates on Dual Mini Sim which has a standby capability just as what is
experienced in the previous versions of the Dual Sim Tecno Handsets.
==>    It
runs on 1.3GHz quad-core Cortex-A7 CPU, MediaTek MT6582 chipset, Mali-400MP2
GPU Processor. It also has a 1GB RAM and 16GB ROM (internal storage) with
memory card support up to 32GB. 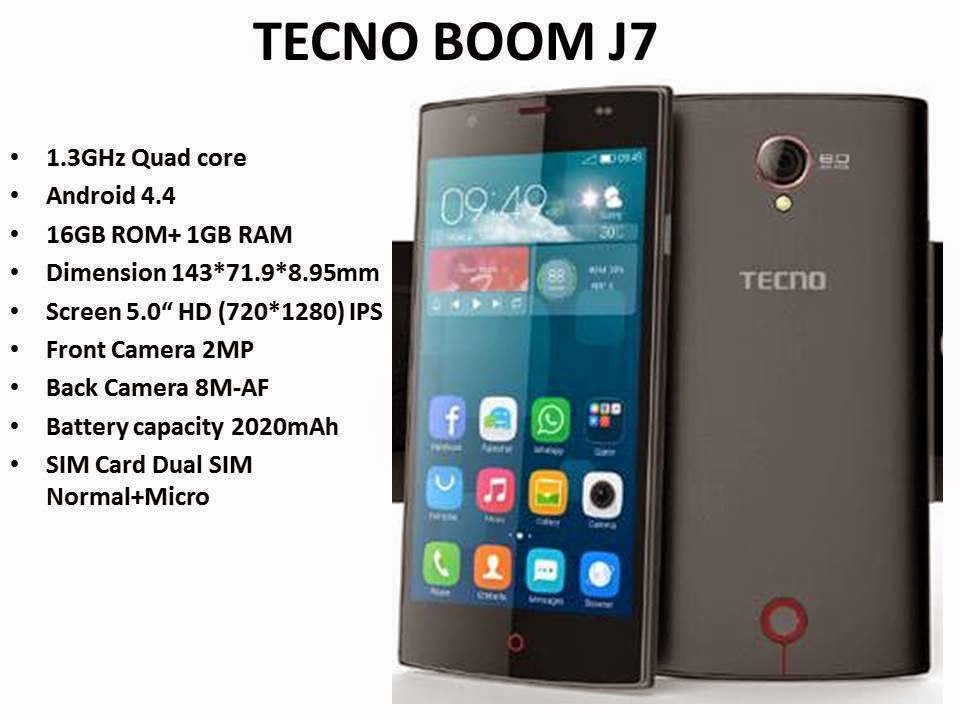 ==>   It
runs on one of the latest even though not up to date for we have the Lollipop
5.1. Tecno Boom J7 runs of Android 4.4.2 Kitkat operating system.
==>  Colors
that the phone will be available in come April 2015 (this month) are white,
black & silver.
==>   It
has a screen size of 5.0 inches, 720 x 1280 pixels, 294 pixels per inch (PPI)
and a capacitive touch screen.
==> It
is a perfect improvement on Infinix Hot Note
Camera Properties
In this selfie World, camera specifications
have become the most important bit of every smartphone. Leave alone the time
smartphones had a 2MP or 4MP rear camera. Tecno Boom comes with an 8MP auto
focus rear camera with LED flash ofcourse. This is almost perfect way up some infinix gadgets like Hot Note

Battery
Specifications
This is the other most important
segment on every gadget. You have to focus on the battery capacity. You cant
expect a smartphone to run effectively on a low capacity battery like 1500mAh.
Tecno has given the Tecno Boom J7 a 2020mAh battery capacity. This is not the
best neither is it the worst.

Can I Change The IMEI?

Yes you can change the imei to
your taste.

It will be launch in Nigeria
this month and I know it as I know my name that Etisalat and MTN will always support
them.

Watch the official Unboxing video
below