Skip to content
Whatsapp has been working underground after the launch of
WhatsApp Status, a feature similar to instagram stories. Specifically, WhatsApp
is testing its business tool,  a new chat
system that might allow businesses to speak directly with users, to begin its
revenue stream, and is expected to launch the stable version before the year
roll out.
Meanwhile, these are the latest changes on WhatsApp messenger
WhatsApp Calling Buttons Separated 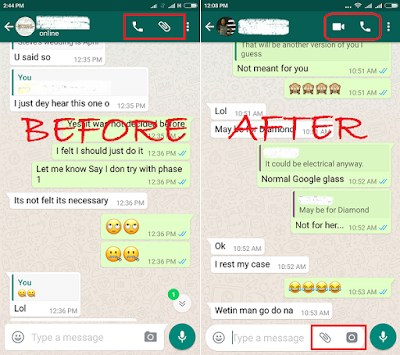 When WhatsApp video was launched, the video calling feature
was hidden underneath the call button on the top right edge. By clicking the
‘call’ button, two options used to pop up – one for voice call and one for
video call – and you had to press the one you prefer. Now, WhatsApp is testing
a separate video button in the latest beta version of Andriod to make the video
calling button more visible to the users.
WhatsApp attachment button relocated 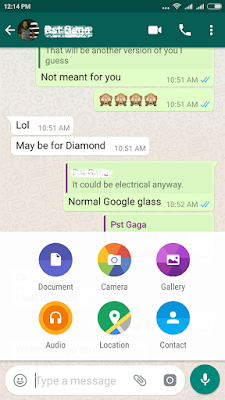 The new WhatsApp video call button for Android replaces the
attachment button that used to sit next to the call button, and the attachment
button has shifted to the bottom alongside the text bar. It sits right beside
the camera icon which has also been redesigned.
But normal WhatsApp users won’t be able to see the effect of this changes now except you are a beta tester. More updates are coming…