Skip to content
Facebook has revamped its Messenger app to make it more like
Snapchat as well. Messenger Day is similar to Snapchat Stories or WhatsApp
Status and allows one to post photos and videos in their ‘day’ that will
automatically disappear after 24 hours.
With Facebook Messenger Day, You’re always in control of who
can see your day — share it with everyone, or choose specific friends and
family members on Messenger. 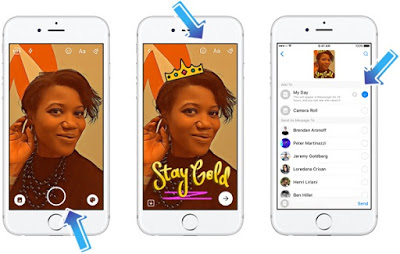 Messenger Day comes with plenty of filters and tools for you
to edit your photos and videos before you share them. In total, Facebook says
Messenger Day comes with over 5,000 frames, effects, and stickers.
Messenger Day, Instagram stories and WhatsApp status Messenger
Day seem to have been inspired by Snapchat, which originally popularized
disappearing slideshows.
Highlights
>>The new ‘Messenger Day’ feature is rolling out globally
>>It has been made available for Android and iOS users
>>It disappears content in 24 hours just like Snapchat
>>Update your messenger app to get the Messenger Day feature.
With this, Facebook has simply admitted that Snapchat is
their boss  by simply copying Snapchat
features into all its verticals, and it’s only a matter of time before we see a
shade of it in the main Facebook app.