Skip to content
WhatsApp is by all means waxing stronger by the day as one
of the largest Instant messenger app in the world. Just like Instagram
introduced the ‘feature stories’ copied from snapchat, today whatsapp has announced
a new feature that let you express yourself using a short video,

a feature
inspired by snapchat. 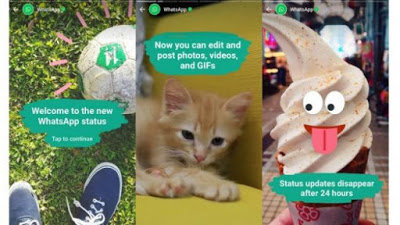 The new feature “WhatsApp Status” will allow you to share photos, videos, and
GIFs as your status(i.e. stories) which will auto-destruct in 24 hours. The
feature was tested in November last year, and was pushed to beta testers last
week.

You will have the ability to control who sees your statuses. Starting with Netherlands and France, the feature will start rolling out for both
iOS and Android today with other markets to follow.

I must say this is a really smart addition to WhatsApp helping you to
alleviate boring status update all the time.