I
still find it difficult to believe that some Android users are still making use
of Gingerbread and Ice cream sandwich Android OS when Google is already warming
to introduce Android 8.0. It is true that we bid goodbye to Froyo back in
January, but Gingerbread, Ice Cream Sandwich, and Jelly Bean continue strive on with unquenchable zest.

The
latest report shows that Lollipop and Marshmallow continue to gain dominance,
while Nougat’s distribution numbers are up to 2.8% compared to just 0.5% in
January. 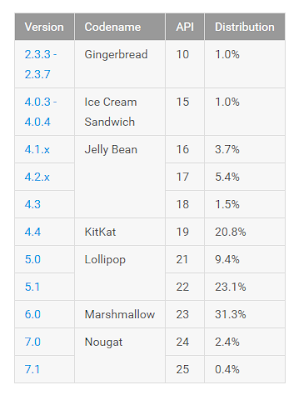 About
20.8% still have kitkat installed on their device, 32.1% have lollipop on their
devices topping the chat, making Lollipop build  the most widely used on Android devices.
Second place goes to Android 6.0 Marshmallow, currently installed in 31.3%
of Android devices. 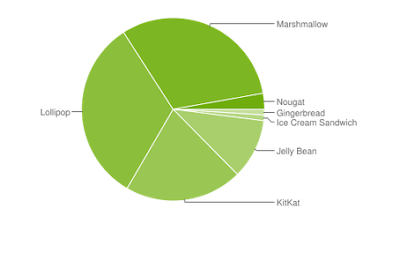 It’s
interesting to note that  most devices
that are now on Nougat runs 7.0 update and not 7.1 which remains at a paltry
0.4% of adoption. That’s only up about 0.2% since the January distribution
numbers, which shows that most OEMs who are rolling out Nougat for their
devices are doing so with the 7.0 release.

Those
of you still on older operating system, it’s time to upgrade.